Back in the spring, Gov. Christie, quite out the blue, announced that he had concerns with Common Core State Standards (CCSS). I’m sure he took a lot of the reformy cheerleaders in the state by surprise. With that proclamation, he also announced yet another review committee to look at CCSS and turn in a report by the end of the year.

A mad scramble ensued over the summer. The committee was quickly thrown together. The composition of the “stakeholders” was announced. As a parent who is very involved and watching closely, I am appalled by a few things.

First, SPAN was listed as the parent special education representative. Those who know me, know I have a very deep respect for SPAN. They do excellent work in this state. I have even had the great privilege of being recognized by them “For Demonstrating Community Leadership to Strengthen New Jersey Families.” In this case, however, I thought that giving the one special education parent spot to an organization, instead of a parent, was unfair. There are many special education parents in the state who would have made a great representative. Oddly, SPAN did not get the seat allotted to them. SEAC did – NJDOE run Special Education Advisory Council. Hmm…NJDOE advising NJDOE. No problem there, right? Here is the full list of Committee members.

I know I’m going to get flak for that comment about SEAC. Let me be really clear. The person appointed represents a dyslexia group that is part of SEAC, and you would only know that if you’re familiar with SEAC members. However, in the NJ education world where transparency is as clear as mud, this appointment was bad form. SPAN, too, would have been for the same reason.

Next was the seat to PTO. Parent Teacher Organization is any non-PTA group. That includes, PFA, PTO, HSA, and so on. I wondered what NJDOE thought the definition was and how they were going to contact all of those organizations in the state when there is no central office for “PTO,” unlike PTA, who can get the word out to the local organizations – in the middle of the summer.

I called the person at NJDOE (whom I will not name, because this is not about shaming any one person) tasked with forming this committee. I left a lengthy message with an assistant and heard nothing back. I then reached out to the president of the State Board of Education. He in turn forwarded my request for explanation to that NJDOE representative and asked that my question be answered. Nothing. I got no phone call, no email, nothing. So much for transparency. Needless to say, the local PTOs I am familiar with had no idea there was a standards review happening at this very moment. They were never contacted by NJDOE for the opportunity to nominate someone.

Then, last night, I attended and provided testimony at the “Listening Tour” (and Focus Group – I’ll get to this) of the Committee. It was held at the Public Safety Training Academy in Parsippany. Only, it wasn’t IN Parsippany, it was in Morris Plains. I wonder if that’s why the third committee member was a no show. Hmmm.

We each had three minutes to weigh in on the entire content of CCSS. Beyond the laughable time allotment, it also appears that none of it was recorded. Less than 10% of the entire committee was in attendance, and they will not hear what was said. They can read it, but I do know that at least one person spoke about something entirely different than what was submitted in writing – something I regularly do at Senate, Assembly, and State Board of Ed meetings. I hope those members in attendance took great notes.

I chose to speak about process. I am a stickler for process, especially in the public sphere where everything should be transparent. I mentioned everything above. And, where special education is concerned, all of the money spent on NCLB and CCSS and the testing and prepping and the insipid notion that education is a one-size-fits-all enterprise, has cost us dearly. How many districts have spent the money on computers to take the tests instead of reading specialists?

And then, there is The Survey. A very, very laborious and long survey. I sincerely hope teachers take what will undoubtedly be a big chunk of time to complete it. Parents, I suspect, will not. At the very least, I hope they will attempt the standards for the grades their children are in, or were in last year.

Again, process matters. This survey is taking place at the busiest time of year for teachers. For parents, it’s pretty clear they did not have us in mind at all when this was developed. Frankly, I fully expect that even if a few thousand surveys are completed (or turned in incomplete) the spin will be that NJDOE has thousands of data points to brag about. Nevermind that only a tiny percentage of teachers took the survey.

Finally, in the vestibule there was a monitor listing the events happening last evening in the building. Standards Review Listening Tour and Focus Group is how it was listed. What happened last night was definitely not a focus group. Interested to see if NJDOE does follow through with conducting actual focus groups and who/how those participating are chosen. Or, will last night be referred to as a focus group in the final report? Hmmm.

It is impossible to take any of the state’s review committees seriously. We are still waiting (months) for the Special Education and the Assessment Review Committees’ reports. What is the hold up? Now we have this one which has about 6 months to gather information, opinions, and deliver new standards? Better? Different? The same but with cursive writing and a new name? I know my education professor friends are both horrified and laughing their butts off. This is NOT how standards are developed.

One of my colleagues is calling this a farce. The #ChristieCCSSReviewFarce. I agree. As usual, we deserve so much better than what we are getting.

I've written about Social Impact Bonds, aka, Pay for Success (PFS) before. You can read those blog posts here , here , and here . I p... 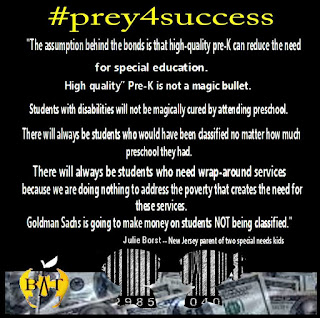